I have a special guest post for you today that I’m really excited about. My friend Kat completed her FIRST sprint triathlon last weekend – the MedWest Triathlon in Asheville, North Carolina! I asked her before the race if she would be interested in sharing her recap on Peanut Butter Runner. I know that some of you are triathloners or are interested in learning more about them.

Kat lives in Asheville (one of my favorite towns ever!) with her husband Joe. Joe is Brandon’s cousin so that’s how Kat and I became friends. Kat actually blogs about healthy living in Asheville over on her blog Moderate Mountain Mama (go check it out and encourage her to get it going again! I miss reading it!).

I hope you enjoy Kat’s race recap. The long hours of training certainly paid off on race day! Way to go Kat!!!

After four months of training – i.e. being a slave to lap swim times (early!!), late dinners (sometimes after 9 p.m.) due to multiple daily workouts and an ear surgery to make swimming even possible – it’s all over after one hour and 17 minutes. So goes the life of a newbie sprint triathlete.

I participated in my first triathlon on Saturday. Prior to that, my athletic event experience had been running a 10K every spring, and that was it. I enjoyed it, it was fun, but it wasn’t a tough run – mostly flat and lots of people = slow going, which is how I go anyway. No pressure.  😉

In the last couple of years, I have become a regular in the indoor cycle classes at my gym, and through those, got to know a lot of the other regulars and an instructor who runs the “Y-Dub Tri Club” training program every spring.  I was encouraged to participate and thought, “Why not?” Last spring I gave it a shot but had an ear issue that prevented me from being able to swim. I also was late in getting my bike, so it just wasn’t happening. I was disappointed, but I set my sights on this year and vowed to do it. I had my ear surgery in February and started really training in early April once I was cleared to be in the pool.

I awoke on Saturday morning early – like before 4 a.m. This was not by choice – my clock was set for 5. I tossed and turned for about an hour and finally got up. Drank some coffee, fueled with an English muffin with almond butter and a banana (channeling my inner PBR ;)). Got to the race site about an hour before start time, Hubby in tow. I was so happy to have him with me – he was such good support the entire day.

I set up my transition space:  bike, helmet, sunglasses, race number/belt, cycle shoes, running shoes, small towel to dry feet on, bucket to sit on while putting on shoes….did I forget anything???  It’s a lot to remember when your stomach is churning with butterflies. Feeling satisfied that I had everything I needed, I went to get drawn on.  It was funny to have a teenage volunteer writing on my shoulders, thighs, and calf with a Sharpie. I’m sure it was the highlight of their day.  🙂

Once I was all marked up, I figured I should go warm up but the idea of having to re-arrange my transition space put my stomach in more knots, so I just jumped in the pool and did a few laps. By that time, it was time to line up for the swim start. I chatted with the people around me as we waited our turn to start. Everyone was so friendly and supportive, and I learned that I was not the only “newbie”. It was very encouraging.

The swim felt great. I actually passed someone in front of me, which gave me a little jolt of pride and confidence.  I knew my challenge was going to be pacing myself on the swim – I have a competitive swimming background and I’m programmed to sprint in the pool. But I held back enough to be able to finish the swim strong – I actually ended up first in my age group in the swim! 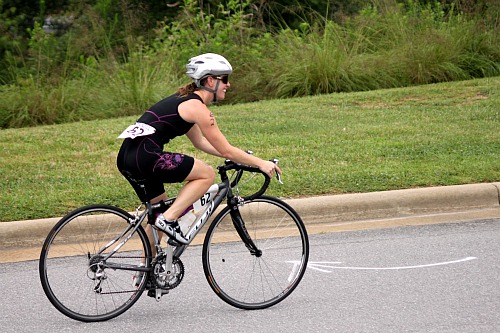 I needed that positive start because the rest of the race was tough. The bike was 10.5 miles of rolling mountain terrain. Most of it felt fast but the finish was straight up a hill to the transition area and I had already been climbing for some time before that…I actually was only able to walk into the first transition, huffing and puffing (the general idea is to run into your transition and get in and out as quickly as possible :oops:.

I had just enough time as I changed from my cycling shoes to my running shoes to catch my breath before heading right back out for the 5K run. I had been dreading this run for the entire race – I drove the course the night before and the run course was challenging. I knew I was in for a ride when I was talking with the wife of the number two seed, who had run it last year, and she said it was a tough course. 😯 Lots of mountain hills.

The first half of the run was really bad. I had fueled during the first half of my bike ride with about 24 ounces of electrolytes…and it was still in my stomach, sloshing away, as I started my run. I mean, I’m sure the people I ran by could literally hear the liquid sloshing around as I passed (or as they passed me, which was more often the case).  Almost immediately, I had myself a nice little side stich going on, and the run became painful. I slowed to what felt like a shuffle but pressed on. Finally, I just stopped. Stuck my finger in my side and pressed on the stitch. Stretched it out while pressing.  Bent over while pressing. Stood back up, started running again. And it went away!

The second half of the run felt much better, though not perfect. It was one of those runs that I was actually just hitting my stride about the time I was finishing. And again, the finish was straight up a hill. Luckily, I had an awesome cheering section the entire last quarter mile up the hill, and that literally got me through. (Side note:  if you’ve ever contemplated whether to go cheer on an athlete at an event, DO IT. You have no idea how much it helps.)  So I came through the finish happy, and ran straight into Hubby’s arms (did I mention how much I appreciated him being there?). I stuck around to cheer on the other members of our Tri Club, and celebrated with them and our supporters afterward.  It was an awesome day.   My stats:
Official time:  1:17:01
Overall:  44th
Age group: 4th

My take-home? If you’ve ever thought about doing a triathlon, but are holding back out of fear of failure, self-doubt, whatever: GO FOR IT! You are physically capable of way more than you give yourself credit for!  It was one of those things that I never thought I’d be doing, ever. So I had to do it. I find myself, here in my mid-thirties, wanting new experiences, new challenges. Maybe it’s because I finally have the confidence to believe that I really can do it…whatever “it” may be. I wish it hadn’t taken so long.  But now that I’ve got it, I feel like I can at least TRY anything. Next on the horizon? Toying with the idea of one of those Marine Corps Mud Run things. I’d love to put together a team…any takers?  😉

Congratulations, Kat!!!  Are you a triathloner? If not, would you like to do one? I don’t know why but I have this resistance towards triathlons. I love to swim and run but I’m so scared of the bike! Maybe I’ll take the plunge one day…I have a feeling I may become a triathlon monster though! 😉